What do the simple folk do? 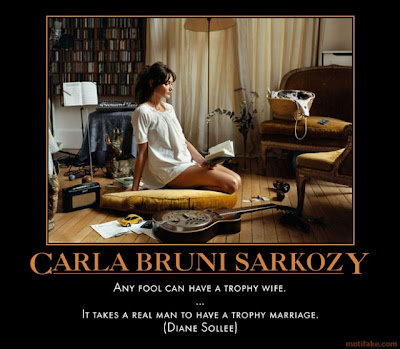 My campaign to enlist Carla as Mrs. T's sister wife was making progress of a sort hit until Mme. Sarkozy chimed in. While pandering/ electioneering, to the French masses in order to keep her husband in office, Carla announced with a straight face, that she and he were just simple, stay at home folk, and they much preferred living in her home in the Paris suburbs than The Elysee Palace, the traditional home of the French President. Their idea of the perfect night was spent watching a DVD at home. Cue the Camelot soundtrack!
" In a recent PR exercise to show how ordinary the presidential couple are, Bruni told a TV magazine she liked to sit on the sofa watching soap operas and the French equivalent of Pop Idol, despite Sarkozy vaunting a new-found love of watching DVDs of European arthouse films."-The Guardian
I was crestfallen. If that's her idea of a good time she'd fit in well, but it's not what I had hoped. I expected she would have been more outgoing, engaging, perhaps even entertaining.
While attempting to get through Midnight in Paris over the weekend, Mrs. T's threatened murder and claimed she didn't want some glitzy show girl as our wife. In my heart I know she's right, I wouldn't have the time, desire or energy anyway. I'm so over her. Another great plan killed by reality.
Toad
Posted by Toad at 12:00 AM

Not me my friend. I'll invite you to the wedding.

MrSP shot down Alec Baldwin as his brother husband. I feel your pain.

SubPrin raises an excellent point; do let us know Mrs. T's nominations for "brother husband," and whether you approve.

I'll ask, but I'm uncertain whether she wants to break in someone else. Bro-Hus would have to come mightily trained.

You recon she knows how to play that Dobro? If she knows any Osward Kirby tunes, she's OK with me.

"I'm uncertain whether she wants to break in someone else."

Oh, I see. I thought they were just supposed to be decorative cameo-appearance folks. I was going to select Donald Sutherland, but if he's going to have to be useful around the house, I may reconsider.

Game Theory or Milton? How to decide?

We interrupt this Carla Bruni Simple Folk chat to bring you important breaking news regarding horizontal stripes on structured blazers:

"Game Theory or Milton? How to decide?"

I can't WAIT to get to Game Theory. Did you even LOOK at the material covered in the 24 lecture sessions? Max would be ASHAMED of you ducking out of this magnificent class.

Take a look at ADG and his horizontally striped shirts, then take a gander at some of the photos the proprietor here. Some can, some can't. Just sayin'.

I remember game theory from college, it wasn't fun then, but you make it sound so inviting. I'm game.

Solve the problem, work backwards... use the game theory... You want the Bruni/thingy. so?? But what if there are multiple players and no dominant strategy...

"I remember game theory from college"

I'm having to do college in reverse. First time around, a fine arts major, a BFA. I have no history, other than art history. No economics, no literature, no science, etc. but I do have unstructured time to fill in the gaps now.