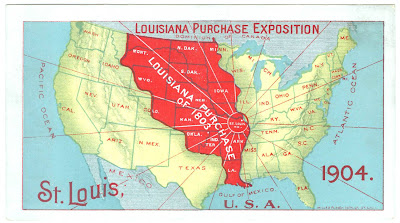 Mayberry's largest suburb, the City of Saint Louis,Missouri was founded in 1764 by 2 lost French Canadian fur trappers. Situated on the confluence of what are now known as the Missouri and Mississippi Rivers, it was a good place to trap, so they stayed.

During the 1700's depending upon the fortunes of war and marriage the royal cousins, rulers of France and Spain traded ownership of the ground underneath the new city every 30 years or so. During the later years of the 18th century Saint Louis was in Spanish territory. (The land our home sits on was first deeded as part of a Spanish land grant.) France took over in 1800 but couldn't be bothered and left local governance to the resident Spanish authorities, until Napoleon sold its American territories to the fledgling United States in 1803.

It took time for the news to travel. On March 9, 1804 the Spanish flag which normally flew over St. Louis was finally lowered for the last time. To honor the locals the French tri-color was briefly raised then lowered after which the Stars and Stripes was raised. For one day, the city lived under the flags of 3 countries.
Toad

What an interesting read! You always have such good posts. Thank you Toad.