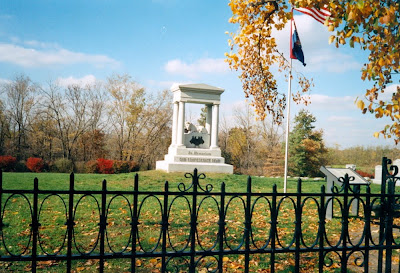 I like soldiers. I like ours, I like theirs.
Throughout history, soldiers have mostly been obedient kids, doing a job their elders told them to do without thought, or concern for the reasons why. They have performed their jobs honorably, to the best of their ability, asking nothing in return. I firmly believe that if the Geneva Convention required the pool of conscripts to begin with politicians then 40 to 50 year olds, the world would be a much safer place.
In Mississippi, today is Confederate Memorial Day, one of four days set aside in the southern US to commemorate those who died defending their homeland. I find the tribute fitting.
Americans died during the Civil War, far from home, in venues barely imagined. The Confederate memorial above is in Higginsville, Missouri, near Kansas City, a battlefield far from your notion of where a traditional Civil War battlefield should be. The men memorialized there fought and died, some for a cause they believed in, some because fighting was expected of them.
History is not only about the winners. Today, we honor American sacrifice. Wherever, why ever, how ever, it is important that we do so.
Toad
Posted by Toad at 12:00 AM

Great post. We should always remember our fallen. Whether right or wrong, they sacrificed it all for a cause they believed in!

I'm sure my Confederate soldier great great grandfather did not have words these fine spoken over him when he died held captive in a Union prison. What a lovely tribute this is, sir. You're makin me weepy...

The need for 4 Confederate Memorial Days' speaks volumes about the difficulties faced by Mr. Davis.

Very interesting things to be learned around here.

I didn't know that Memorial Day was originally for only Union Soldiers. I thought it was for all soldiers and began after WWII.

All soldiers should be honored for their service. Thank you, Toad.

Memorial Day began life as Decoration Day soon after the Civil War, to honor the Union dead. The name wasn't changed until the mid 1960's.

Thank you for this post. Wish everyone was wise enough to share your perspective. I am direct descendent of soldiers on both sides, and they lived only a few miles apart.

buy zolpidem zolpidem no prescription canada - what does zolpidem look like

ambien without a rx buy ambien from us - ambien cr 7.5