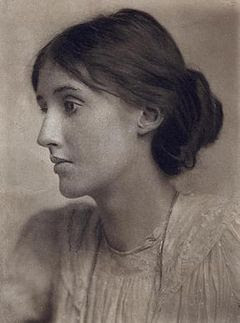 Virginia Woolf died.
I know more about her life and death via Vita Sackville-West than through her literature, A Room of One's Own being the only work of hers I've completed. Orlando and Flush I've begun many times yet they remain unfinished. I'll work harder this year. Secretly, I wonder if she represents that part of the canon more readers claim to have read than have actually done so. Is that a male point of view, or just plain stupid. I'd admit to either, and would appreciate a guiding light.
Knowing you're becoming unhinged is a terrible cross to bear.

In her last note to her husband she wrote:

Virginia then put on her overcoat, filled the pockets with stones and walked into the nearby River Ouse. Her body wasn't recovered for 3 weeks. Hopefully, she found the peace she searched so long for.
Toad
Posted by Toad at 12:00 AM

I have always loved "A Room of One's Own." Virgnia's letter to her husband is so sad - the fact that she knew her illness was overtaking her. I can't imagine. She certainly left a literary legacy that will never be forgotten.

Seeing Ginny Woolf's picture drew me in. I have read this heartbreaking farewell before. I think you're probably right about who reads her. Forget everything else and read the "Time Passes" section of "To the Lighthouse."

So articulate, so sad.

Thank you Jacqueline, I will. I have reserved the next available copy from our library.

I have never read her work.
What a sense of peace she must have had at the end...there is always an end, by the way.

Mrs. Dalloway is one of my favorite books. Read it, then Michael Cunningham's The Hours. To the Lighthouse is wonderful also.
That letter is so beautiful and heartbreaking. I, too, hope she found peace.