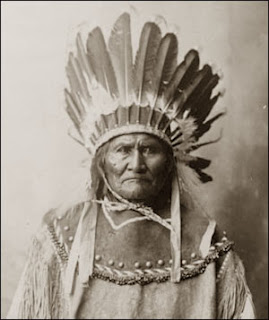 "I should have fought until I was the last man alive."

If you ever want to really confound the grandkids turn on an old wild west/wagon train/Indian movie.  The first time we did we got stink eye for our trouble along with "they are doing what  to whom". Our explanations left them believing we were soon on our way to the home. We've come a long way in America during the past 50 years, mercifully we no longer shoot natives for entertainment.
Today marks the anniversary of the 1909 death of Geronimo, the last Apache leader to be captured by the US Army. Geronimo died as a prisoner of war, in custody at Ft. Sill, Oklahoma,
Raiding was a way of life for his band of Apaches.  They made enemies easily while they raided and fought the Mexican army, the Navajo and Comanche tribes, and  when the Mexican/American war ended in 1848 the US.   Geronimo's father in law, Cochise surrendered his tribe to the US in 1871, and were moved to an Apache Reservation in Arizona.  Geronimo and his followers held out until 1886 before surrendering.  His tribe spent 27 years as prisoners before being forcibly moved onto the Arizona reservation.  Geronimo remained in custody for the rest of his life.
His 1905 autobiography is a pretty good read.