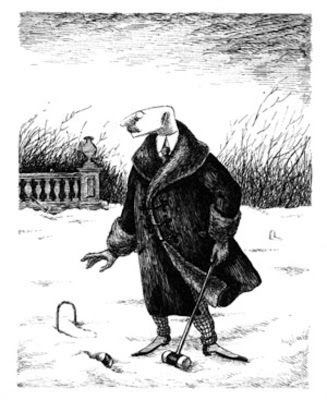 Today would be the birthday of author and illustrator Edward Gorey, perhaps best known in the US for drawing the opening credits for PBS Masterpiece Mystery.  Gorey was what was once described as an "oddball".  Something of a recluse tall, thin, heavily bearded Gorey never married. He lived alone with 6 cats on Cape Cod and was a man of regular habits. He had breakfast and lunch at the same restaurant most every day, rarely missed a performance of the New York City Ballet, worked all morning on any of the 100 or so projects he constantly juggled then spent afternoons watching soap operas or the X-Files. A lifelong polymath, he was a voracious and wide ranging reader, but he also went to the movies, every night.

His signature drawing style, considered by some Gothic was usually tinged with  horror but often with a wink.  Gorey says he was too squeamish to become properly morbid, and hated having his work described as macabre.

I admire Gorey as much as an author as an illustrator.  Gorey published over 90 books and illustrated 60 others during his lifetime.  He wrote the books first, most barely a few pages in length, then drew.  I find the words pitch perfect. 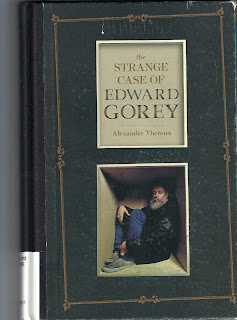 Alexander Theroux, one of Gorey's few close friends, wrote a 2001 monograph The Strange Case of Edward Gorey, something of a biography and explanation of Gorey's work.  I suggest that you avoid having friends like Mr. Theroux.

He lived down the street from my parents. They actually thought about looking to purchase the house when he died, but, ick, 6 cats......Eventually it was turned into a museum.