Another way to kill strangers 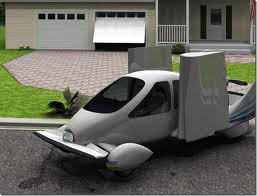 Although cold in its application there is a saying around our house that pops up whenever we hear of someone dying in some incredibly stupid, senseless, what are the odds kind of way, "God really must have hated that so and so." For instance, someone killed by falling blue ice. Really, what are the odds? Works for cars crashing into houses, bridges falling, the usual.

For those not troubled by such things, man has created another stupid, senseless way to kill us off, a few rich folk at a time. The Terrafugia Transition. 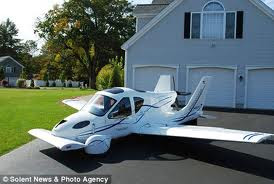 Automobile and airplane in one stylish package. FAA approved, and street legal, with first deliveries scheduled for sometime in July. Set you back around $200,000 US. Gets better than 30 MPG on land and air, which is better than I can attest for our land yacht (although the land yacht hasn't been tested in air). 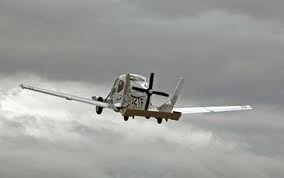 Imagine the turf battles brewing on who gets to write the accident reports, the FAA or the highway patrol.

Oh no that design is unreal! You have called it right Toad!

Well, as long as the victims are a very select few...

Street legal maybe, but can you insure it?

FAA and street legal? Geez. What next?
Two licenses, too.

Toad, do you recall the 1950s (or so) TV show with Bob Cummings and his flying car? The concept seems to resurface about once a decade

NCJ, no. You made me look it up, so luckily I have learned something today. Kind of like Picturphones, and they had almost a 70 year gestation.