Love of an old suit 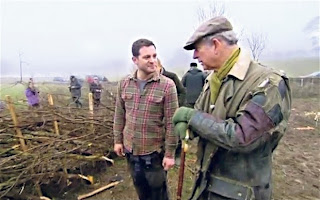 In their blog, the apprentices of Saville Row tailor Anderson and Sheppard tell the story of their Managing Director/Head Cutter Mr. Hitchcock and the box of fabric remnants left from suits made for the Prince of Wales that he keeps under his cutting table. The accompanying photos showed the before and after of one of the Prince's suit jackets, which he harmlessly left hanging on the back of a chair. While unattended the jacket skirt was shredded by a dog. Somehow Mr. H was able to make it right, using saved fabric. 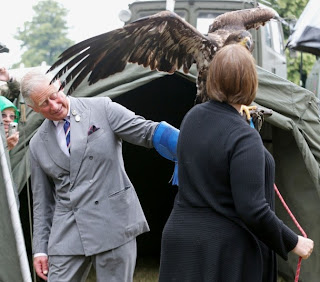 Mr. Hitchcock will soon be called upon to right another suit casualty. Prince Charles is catching grief for repeatedly wearing a hastily patched suit. Seven times in the past several months Charles has been spotted wearing his favorite suit in not like new condition. 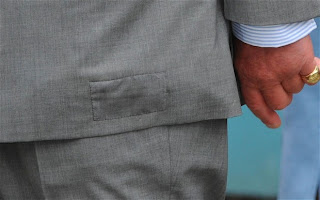 His peeps contend he'll have it repaired while on holiday, there's no call for DB during grouse season.
Posted by Toad at 12:00 AM 13 comments