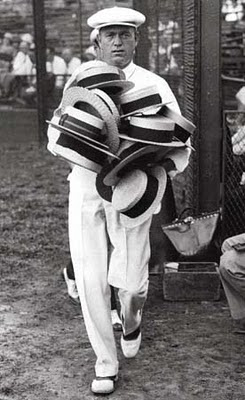 Chicago Sun Times photo
Much has been written lately about what is and what isn't appropriate Easter attire. Easter is late this year, and the weather likely comfortable yet rules are necessary and do apply.

So, I wrote the author, Fairhope, Alabama attorney David A. Bagwell for permission to republish his work. Ever the gentleman, Mr. Bagwell gave his kind consent.

This boys and girls, is the definitive White Shoe Rule, revised for 2011, all else are pretenders.

Thank you David, and Duck. 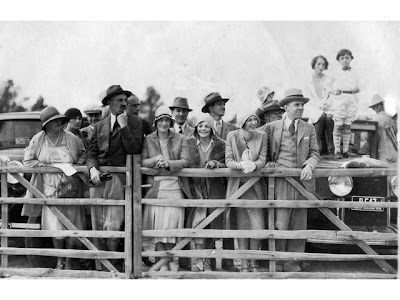 Fifty years ago, and more, the tradition in the deep South was that beginning on Easter weekend -- well before what people now call “Memorial Day”-- it became safe to wear white pants and skirts, white shoes and spectators, and a straw hat. I lump all that light-colored stuff together into what I call “The White Shoe Rule”.
Some Southerners today don’t buy that. They say that The White Shoe Rule doesn’t start until what we now call “Memorial Day”. Most of those people seem unusually certain that they know what they are talking about. But Southern tradition suggests that they are wrong.
It’s a serious fashion question, even in this time of war and economic travail. Maybe it’s idle and frivolous to speak of the rules of fashion anytime, some think, but even during war and elections and recession, life moves on, and so must we.
So, when may we properly begin --and when must we properly stop-- the wearing of white? Good question.
Do you remember the book The Southern Belle Primer by the wonderful [late] Marilyn Schwartz, whose subtitle was to the effect that Her Royal Highness Princess Margaret could never get in Kappa Kappa Gamma sorority because she wore white shoes in Texas the wrong time of year? I’m convinced that a lot of people beyond princesses misunderstand all this “White Shoe Rule” stuff. A lot of us don’t know as much about our dress code history as we should, or as much as we think for that matter.
Oh, sure; I know that every written source on fashion which might mention it, will say that you cannot wear white or straw hats before “Memorial Day”; we’ll get to all that in a moment. What you will read in those books is just – out with it now – just the Yankee rules. It’s ok for them to have their rules, but here in the South, ours were always different.
Of course nobody should wear white all of the time. In 1880 Mark Twain wrote of his character Colonel Grangerford that “every day of his life he put on a clean shirt and a full suit from head to toe made out of linen so white it hurt your eyes to look at it.” But every day? Even in winter? In deepest winter, now, you’ll obviously make a spectacle of yourself in white. Mark Twain did. On December 7, 1906, when Mark Twain went to a copyright law hearing in the Capitol in Washington, D.C.– in December in Washington, mind you– he wore a suit of white wool flannels, not white linen. But the ruckus he raised by wearing a white suit in Washington in the winter landed him in stories in the New York Times, Herald, and Tribune the next morning. Of course, his point about copyrights was in the article, too, which just goes to show you that clothing can not only make a fashion statement, it can also help your substantive statement get published. Twain said funereally that “when a man reaches the advanced age of 71 years as I have, the continual sight of dark clothing is likely to have a depressing effect upon him”. And “a group of men in evening clothes looks like a flock of crows, and is just about as inspiring”, he said. But, if you aren’t 71 and you aren’t Mark Twain, and it is not 1906–and I’m not and it isn’t– you must pay some attention to these rules, you know. Which means that you must know what the rules are.
The first thing to understand is that there are EXCEPTIONS to all this White Shoe Rule stuff, no matter when the starting date is.

One exception is "The Southern Resort Exception". At any Southern resort, like Boca Grande or Palm Beach or farther off in Bermudan or Carribean resorts and all that, white clothes and straw hats are ALWAYS allowed, regardless of the season. My father told me that the Northerners who went to the University of Alabama with him in the early 1930s wore white shoes all winter, on the apparent theory that Tuscaloosa was a Southern resort, which is clearly twelve points off true north.
What’s a “Southern resort”, anyway, outside of Boca Grande or something? Well, probably the place where I live– Point Clear on Mobile Bay -- barely qualifies as “a Southern resort”, although locals don’t wear white shoes here in the winter. What about Charleston and Savannah and Mobile? Well, maybe, but that’s pushing it. My correspondent in Charleston reports that a man dressed in all white, especially if any of it is patent leather, tends to be called there “full Cleveland”. Here on the Gulf coast in winter the “snowbirds” from Michigan and Ohio and Canada wear shorts all winter visiting here -- and shiny nylon jackets which say things like “UAW Local 312" on the back-- but snowbirds just don’t count for my purpose; I mean, they’re just snowbirds, who have their own rules. To an Englishman, any place where it is warm, and not raining at that moment, is apparently considered a “Southern resort”, which is precisely how H.R.H. Princess Margaret got in such hot water out in Texas for wearing white shoes in Dallas before their time– whatever their time is in Dallas. There are wonderful photos of Winston Churchill in a white suit, often wearing his favorite white panama Stetson in the “Open Road” pattern; you know, the pattern which in gray was worn by LBJ and by every single graduate of the Colorado School of Mines. But whites in London? A British judge told me once that, years before, he looked out his office window one summer day and saw his boss wearing a white suit and white panama hat in London, and that he involuntarily exclaimed at the sight “A Panamanian ponce!” [“ponce” of course being English slang for procurers for pay of the favours of exceptionally fast females].
The second exception is “The Yacht Exception”. I am not sure of the breadth of this exception, either, never having owned a yacht and all, but I think that weather permitting, you may always wear white clothes on a yacht, at least if you don’t change your own engine oil, and no gentleman does that. This may be a sub-theorem of the Southern Resort Rule, since one always keeps her yacht in the South during the winter, doesn't she? And, speaking of The Late Princess Margaret, since the British Royal family has sent the Royal Yacht BRITANNIA to the wreckers for scrap, I just don’t know where they wear their whites, other than maybe Dallas in a pinch. The picture on my wall of Commodore Vanderbilt on his yacht – and before “The Late Unpleasantness” his yacht was the biggest yacht in the world– shows him in black wool with fur trim, so obviously it is not de rigeur that you wear whites on your yacht in winter. What’s a yacht? Well, paraphrase what J.P. Morgan said about “if you have to ask . . . . .”. I do know that none of my little canoes and ducking skiffs and kayaks and rowboats and motor skiffs is “a “yacht”, and so mostly I just wear khaki shorts.

Ah well. It was drilled into me as a child: no white shoes before Memorial Day or after Labor Day.
I've lived in Florida for years now and we can tell the tourists from the locals in one simple way: they wear white shoes year 'round.

It was 89 here yesterday and I may have worn white slacks, but my shoes were black. :)
But then, I'm in the older generation.

Where I grew up in Virginia, Easter was the day I got to wear my new white patent leather mary janes, my new flouncy flowery Easter dress, and the dreaded new hat with the elastic string to hold it on that my brothers always snapped against my chubby chin when I wasn't looking. Thanks for the validation, and a well written history.

Whatever happened to Duck....no posts in gaes...so long I stopped following..

"(reprinted with permission on the near occasion of our 1000th post)"

Wait a sec, are you saying that YOU are on the near occasion of a 1000th post? You're slipping something like that between parentheses?

And here in California, we say "Pshaw!" to the entire rigamarole:).

Well then, as part of the run up to your actual Celebration Day, let me unfurl an early verbal banner on your behalf -- I don't know too many bloggers out there who are as loved as you are, Sir Toad. So eat your Wheaties, and take your multi vitamins.

You are too kind. thank you.

I grew up in Baton Rouge with parents from French South Louisiana. Easter was definitely the start of white shoe season, not Memorial Day.

Now that I read your article I finally know why Yankee Memorial Day was not something we Southerners would plan something as important as fashion around.

hi.thanks for sharing the post.plan your wedding more memorable with sankar live music wedding events.sankar is one of the best singers in bangalore.he performed many corporate events like INTEL, IBM,Centum Electronics, Wipro, Accenture, TATA Group, Karle and many more..

Can I wear white shoes with a red dress?
white pumps shoes