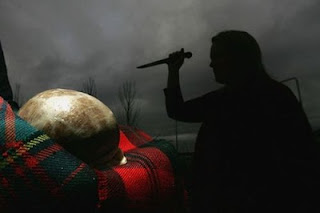 Get cozy and chill Tumblr

American's hardly know and little care that today is Robert Burns Day (or Night), the anniversary of the birth of the Scottish poet and lyricist, the Bob Marley of his time, Robert Burns. We canna do the accent, and as long as 95% of us can make up the lyrics to Auld Lang Syne as we go, and Scottish distillers remain in operation we are mostly OK giving Rabbie a miss.

On this side of the pond is a powerful fear of eating haggis, which is rather sad.  True haggis is difficult to obtain, and in the US, sheep lung, a key component, is considered unfit for human consumption.  We canna import from the UK either.

We should know a bit about the Bard, if only to be neighborly.  Rabbie took to poetry when he found it a good way to chat up birds, at which he became quite successful. His first book of verse was sold when he was 27, to raise funds so he could hightail it to Jamaica with his girlfriend, Mary Campbell. Burns hoped to escape the mother of his first daughter Elizabeth and Miss Jean Armour who was pregnant with his twins.

That the book sold well was a blessing and a curse in that it convinced him he had another talent, one that paid, so he cancelled the move, dumped Mary and married Jean. Profligate Rabbie had at least 13 known children, 5 out of wedlock, 3 named Elizabeth. Written for his first born Elizabeth was A Poet's Welcome to his Love Begotten Daughter, or as Burns called it "Welcome to a Bastart Wean".

Raise a glass tonight to Mr. Burns, he deserves to be remembered, for his poetry, his storytelling, his love for and hopes a republican Scotland and his love of fine lasses.  May his memory live forever.

Bonnie wee thing, cannie wee thing,
Lovely wee thing, wert thou mine,
I wad wear thee in my bosom,
Lest my jewel I should tine.
Wishfully I look and languish
In that bonnie face o' thine;
And my heart it stounds wi' anguish,
Lest my wee thing be na mine.